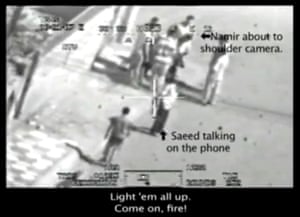 Assange, he says, brought the truth of the killings to the world and exposed the lie that he and others had not.“What he did was 100% an act of truth-telling, exposing to the world what the war in Iraq looks like and how the US military lied.”

Of the US indictment against Assange, Yates says: “The US knows how embarrassing Collateral Murder is, how shameful it is to the military – they know that there’s potential war crimes on that tape, especially when it comes to the shooting up of the van …They know that the banter between the pilots echoes the sort of language that kids would use on video games.”

Source: ‘All lies’: how the US military covered up gunning down two journalists in Iraq | US news | The Guardian